If you could visit Harry Potter's world...

I found this on the Magic Violinist's blog, which is my happiest blog discovery this  month! She also does Quote-a-thons from my favorite movies, like the Princess Bride and Despicable Me. 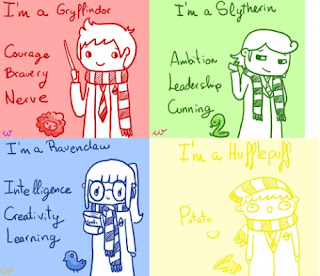 Would you rather explore the forbidden forest or the halls of Hogwarts?
Tough one! I'm more of a nature girl, but the high likelihood of monsters makes me hesitate, unless Hagrid was with me. And how could one pass up the chance to explore Hogwarts? I'd let the moving staircases take me off to random places. Too hard to choose!

Would you rather enroll in Potions, Charms, Divination or Defense Against The Dark Arts?
Do they offer a "using magic in your writing" class?

Would you rather buy an owl, cat, rat or toad?
I'm a cat person, but I think toads don't get the attention they deserve.  Could I have two?

Would you rather have in possession: the elder wand, resurrection stone, or the cloak of invisibility?
Can I pass on these and request Hermione's time turner? The cloak of invisibility is so tempting, but I'm so clumsy I'd give myself away even with it.  The elder wand is too much responsibility. And the resurrection stone is too... again, too much for a mere mortal.

Would you rather be tutored by Luna Lovegood or Hermione Granger?
My first instinct is to say Luna, even though I love Hermione dearly and she'd probably be much more helpful. But Luna would be more entertaining, and my brain works more like hers than Hermione's.

Would you rather, in the final battle, fight against Nagini (the snake) or Bellatrix?
I'm just going to pass this question (shivers).

Would you rather fight a basilisk or a dragon?
I'm going to change this to which would you rather make friends with, because scary creatures need love too.  A dragon.

Would you rather be a part of the Malfoy family or Weasley family?
... Is this supposed to be a trick question? Weasleys!

Would you rather have a butterbeer or pumpkin juice?
Butterbeer.

Would you rather fly on a broomstick, Hagrid's motorbike or Buckbeak?
Buckbeak. I'm all about the mythical creatures.

Would you rather have a conversation with Daniel Radcliffe or J.K. Rowling?
Rowling, of course. I'd want all the details on how she got her ideas, because I love hearing stories about how writers got their ideas.

Random tidbits about Harry Potter at our house:

1. My six year old twins for some reason always refer to Harry Potter as Peter Potter. I'm not sure why - some confusion with Peter Pan? Or Peter Rabbit? (hah!) Anyway I'll be sad when they outgrow it.

2. My older daughter had a slip of the tongue and said  Harry Potty the other day and we are having WAY too much with that.

3. Which has in turn inspired frequent refrains of "Poor poor Roddy, flushed down his own potty" (from the movie Flushed Away).

Okay my reading friends, join the Harry potter meme! Consider yourselves all tagged.  I'll add one bonus question:  what's your favorite Harry Potter book, of the seven? (Hah! I can't even answer that one!) (well, if I must, probably the Goblet of Fire).

Posted by Margo Berendsen at 9:13 AM