Most antagonists stop here. One that doesn't 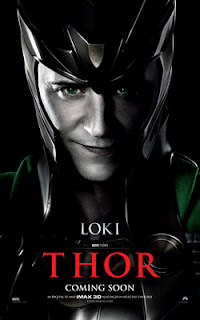 It's been many months since I saw the movie Thor, but one of the characters, Loki, inspired me to recently watch the movie again. He's one of the most interesting antagonists I've encountered in a long time, and I wanted to figure out why (WARNING: spoilers ahead):

Who is he? A prince, infamous for being a trickster and a silver tongue

What does he want?  To be king of Asgard.

What stands in his way? His older brother, Thor.

Loki makes a deal with the enemy and capitalizes on his brother's weakness - pride, recklessness - to get Thor banished from Asgard, which puts him in line to become king

Most antagonists stop here. They have only one motivation.

Not Loki. Here's where it gets interesting.

He confronts his father, Odin who confirms that he is indeed the offspring of their worst enemy. Loki's world is shattered. Odin claims he still loves Loki as his own son, but Loki thinks he's just a pawn in the political maneuverings.

This turns him bitter, so when he has an opportunity to step in as a regent king, he not only tries to destroy Thor but also tries to destroy the planet of the Frost Giants, perhaps in a bid to erase any memory of his unsavory link to the enemy.

We know that we have to throw something unexpected at our protagonists which change their goal(s), but I don't think you see this enough with antagonists.  I think it's this unexpected development in Loki's world that makes him such a memorable antagonist.

Anyone else have a memorable antagonist (from a book or movie) that I could analyze?
Posted by Margo Berendsen at 1:00 AM