A story about Insecurity and Inspiration

Back in March I posted "how an old dream is rekindled" - just for kicks and giggles, I read the first two chapters of my long-shelved unicorn story, Refuge, to my four girls, and they loved it and clamored for more. So, their love inspired me to start working on the story again.

At first, I thought, "this writing isn't half bad... I can clean this up pretty easily". After all, I had 5 years and 3 more manuscripts' worth of writing experience since I shelved this first attempt at a manuscript.

The first four chapters were in good shape and didn't need much work, but after that, what a mess!! I finally realized that mere "revising" wasn't going to work. I was going to have rewrite it, or at least major parts of it.

Insecurity started biting at my ankles (you know those little dogs that are called ankle biters? sometimes insecurity shows up like an ankle biter.) 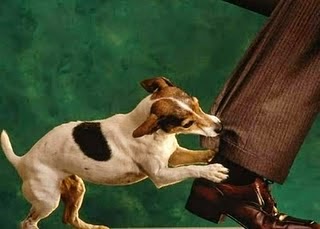 Sometimes, Insecurity shows up more like the Hound of the Baskervilles: dark and really, really scary.

This has happened before (the insecurity part, and the massive rewrite part). I mean, we all know that good writing is essentially rewriting, right?  So the first thing I do when facing a rewrite is I find all the good stuff that is worth keeping, because that makes me feel better.

I read through the first third and copied all the parts that were worth saving. Little bits of characterization, setting, and dialogue. The document with all my bits and pieces was a jumbled mess, so (because I don't yet have awesome software like Scrivener), I had to figure out someway to organize it so that while rewriting, I could easily find the good stuff and fit it back in.

I organized the bits and pieces by character. So I ended up with five documents for five different characters, (kind of like a character worksheet, but in reverse). Then I made a sixth document to keep all the setting details that were worth saving.

At some point, skimming through this sixth document of setting details, my brain did the cool thing it sometimes does (not nearly often enough) and made a CONNECTION. My imagination looked at all those setting details and suddenly, eureka! - it realized that the setting was, in fact, a SIXTH character.

The ankle biter, Insecurity, was momentarily pushed aside by Inspiration, which in contrast is a lithe, shimmery little dragon, kind of like Mushu, the miniature dragon from Mulan,

but a prettier, more clever version that impresses the cricket more often. 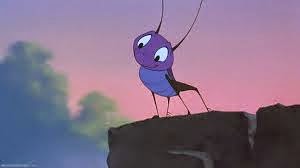 Inspiration twined around my torn-apart story like a purring dragon-cat, sparking imaginative fire for a few days.

Then, the fire went out, and the ankle-biter was back. Because all the pretty little bits and pieces still had to be stitched back together with new words, and the new words were coming slowly and painfully and weren't nearly as pretty as Inspiration had promised.

So, I'd like to say this little story has a happy ending, where the ankle-biter got put on a leash and the purring dragon cat was enticed to stay around and continuing breathing Inspiring Sparks into my story, but the reality is I'm still limping along at rewriting. My new words, more often than not, lack voice. Lack original details. They lack tension and sensory richness and they feel like "filler."

But I write them down anyway, because my favorite quote is Jack London's: "you cannot wait for inspiration; you must go after it with a club" and if I club that fickle dragon cat with bad words then eventually he spits a few good words my direction.

It all takes time and work and that, THAT's how you keep the hounds at bay, until you discover (SPOILER! highlight to see) that the Hound of the Baskervilles of Insecurity is just an ordinary hound tricked out with phosphorous to make him look scary. End spoiler.

What animals do you imagine Insecurity and Inspiration to look like?

Posted by Margo Berendsen at 8:49 AM