In which an old dream is rekindled

Over the past year I've been having SO MUCH FUN re-reading some of my favorite childhood books to my daughters:  the Chronicles of Narnia, Bambi and Bambi's Children, My Side of the Mountain, The Mixed Up Files of Mrs. Basil E Frankweiler, and A Wrinkle in Time. We just finished Bambi's Children and I was debating what to offer them next: maybe Anne of Green Gables?

Then it occurred to me, hey, why not read them my book? Back in 2009 I finished writing a middle grade story about unicorns.

Alas, after finishing it, I found out it was way too long to be acceptable to agents and publishers - it was 130,000 words!!! At that point I realized I had to break it down into two, maybe even three books, which meant a major restructuring. I got overwhelmed at the thought, and switched to a new writing project, and then another new one after that, and I just never got back to middle grade story, even though it was my first love.

But now it's occurred to me that my oldest daughter is 12 years old, and she's getting close to the point where she'll be switching from reading middle grade to young adult. Right now she still loves animal stories and will read anything with horses or dogs in it (or unicorns). But I know her tastes will probably change... my stepdaughter was 13 when she read Twilight and she craved purely young adult after that point.

So right now seemed like a good time to see if my girls would be interested in Refuge (logline: In order to save the last remaining refuge of the unicorns, Selty needs help from her worst enemy: a human girl), before the oldest one has moved beyond middle grade and talking animals. 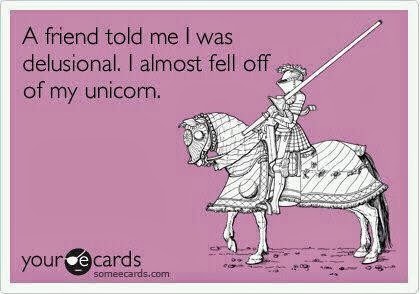 But would they actually like it? And how would I manage the problem of a 130,000 word, ridiculously long book? Well, I started re-reading it, and the five years of writing experience I've had since writing this book showed me immediately how to trim this monstrosity down. Back then I rambled through a story; a lot my scenes were extraneous, not really furthering the plot, just meandering here and there. Since then I've learned how to keep scenes focused on furthering the story. As I was re-reading,  I got excited thinking about how I could tighten it up and make it so much better - but I was also excited by how good it already was (well, to me at least!). I immediately fell in love with it again, and decided to try reading the first couple chapters to my girls to see how they'd react to it.

Absolutely terrifying. Reading this book to my family took all my nerve. I know some writers who have their family read everything they write, even their SFDs (first drafts, you insert the S word if you like) (Anne Lamott's Bird by Bird fans will understand), but I'm not like that. I only want to share the good stuff with them, the certifiably, beta-reader-proofed good stuff. I wasn't sure about this old draft from 5 years ago. But as I started reading, my girls laughed - in all the right places where they were supposed to laugh. They didn't wiggle around and tease the cat and build blanket forts like they do sometimes when a book isn't fully engaging them. And when I finished the 2nd chapter and said "that's all I have, for now," they said, "awwww! We want more!"

And I said, "Really? did you really like it?"

"Oh yes!" Four pairs of shining eyes. "We really liked it. Especially the unicorn parts." (My girls are unicorn and Pegasus crazy, just like I was, and maybe still am. We are different in lots of ways, but if you put pretty shiny horns or wings on a horse, our eyes all light up.)

Well, maybe it was a fluke. I read them chapters 3 and 4 the next night.

Same reaction. "You want me to keep reading this one?" I asked them.

I'm not sure if they'll let me get it edited and tightened up first... but I'm already elbow deep in edits and I guess my official next writing project is not young adult, like I expected, but back to middle grade.

Amazing how an eager audience will motivate you!

Posted by Margo Berendsen at 12:38 AM