The Hobbit Movie - My Top Ten

My love of the Hobbit goes back to when I was seven years old and my parents gave me this illustrated read-a-long version of the Hobbit (on vinyl record!) based on the 1977 movie. I played it over and over again and even made up parts for myself to play along with (because really the only flaw in the story is that there aren't any girls or ladies in it).  Shortly afterward I graduated to reading the full-length book.

I could see how the 2012 movie version would be way too long and weird for anyone not familiar with the book, or at least a fan of the Lord of the Rings movies. Most reviewers are quick to point that out, but one reviewer also said "the film is Tolkien nerd nirvana" and that's exactly why I loved it and went to see it twice. I LOVED that it was nearly three hours long. That's almost three hours I got to leave everyday life behind and visit Middle Earth, and I'll take every last minute of it, thank you very much.

Except for the Azog ("the pale Orc") scenes. Those were blatant additions that weren't in the book, and I hated them. Just pure gratuitous violence and nastiness added to ramp the movie up to PG-13 level.  I wasn't a huge fan of how silly they made Radagast out to be, either. But as for the rest of it... well! Here are my top ten favorite things about the Hobbit: An Unexpected Journey.

SPOILERS ahead - do not continue reading if you have not yet seen the movie.

10. The dragon.
We got to see just enough of Smaug to be really excited about the next movie. I especially loved when Bilbo reads the dwarves' contract and gets to the part about not being liable for lacerations, eviscerations, and.... incineration. Then dwarves proceed to give him a detailed account of what it's like to be incinerated by a dragon. "...think furnace. With wings."

9. All of Gandalf's great lines.
His unique voice comes through so much better here than it did in Lord of the Rings. "I am Gandalf! And Gandalf means... me!" And this one: "Your Old Took's great-granduncle Bullroarer was so huge [for a hobbit] that he could ride a horse. He charged the ranks of the goblins of Mount Gram in the Battle of the Green Fields, and knocked their king Golfibul's head clean off so that it sailed a hundred yards through the air and went down a rabbit-hole, and the battle was won-- and the game of Golf was invented at the same time."

8. "Stop! I forgot my handkerchief!"
And all the other places where wonderful lines from the book slipped in, and other details, right down to the brass buttons popping off Bilbo's coat.

7. The soundtrack.
Howard Shore found the perfect balance between echoing the Lord of the Rings score and new material, especially the theme based on the deep, resonating dwarf song, "Far over misty mountains cold..." And if you stayed around for the credits, the Song of the Lonely Mountain performed by Neil Finn was a definite bonus.

6. Dinner at Rivendell with the elves.
"I don't eat anything green." "Where's the meat?"  Did anyone else notice that the elves came across quite differently than they did in Lord of the Rings? (With the exception of Galadriel). It matches how differently the elves were portrayed in the Hobbit versus Lord of the Rings. I remember as a kid reading the Hobbit and never being sure if the elves were the good guys or not. I especially loved how Gandalf sort of made a game of getting information out of Elrond, in the movie.

5. Pretty much any scene with Fili and Kili in it.
As for the other dwarves - I loved them all them all too. The movie really succeeded in making each dwarf unique and memorable - no small feat with 13 of them! Bofur and Dwalin were my other favorites. Loved the all dwarvish details right down to the snoring and the moths. 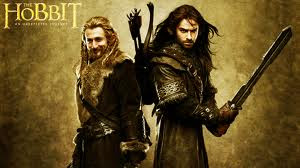 4. The riddle game scene between Gollum and Bilbo.

Creepy, like in the book, but Gollum's dual personality also made it laugh-out-loud funny at times too.
Bilbo: Why don't we have a game of riddles? And if I win, you show me the way out.
Gollum: [talking to himself] And if he loses, what then?
Well precious, if he loses, then we eats it! [turns to Bilbo] If Baggins loses, we eats it whole.
Bilbo: [hesitates] Fair enough.

3. The last line of the movie.

A perfect set up for the next installment: Bilbo says "I do believe the worst is behind us." And I'm thinking giant spiders? Smaug the dragon? oh ho ho, you poor deluded little hobbit. Which allows me to sneak in another favorite thing about this movie: the fact that there are two more movies still to come!

I remembered Thorin as an ugly old grump from the 1977 movie version, so I was surprised and delighted to see Thorin portrayed as a handsome lost prince this time around, with layers of complicated issues. And Richard Armitage! The casting couldn't have been better. 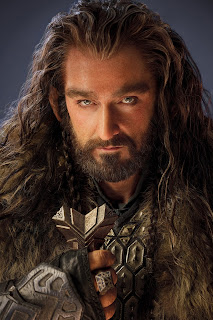 He did a superb job. He made me love Bilbo even more than from the book. His expressions of dismay and "who, me?"  looks were perfect. 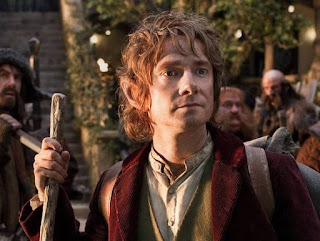 He's the main reason why I went back to watch the movie a second time. This statement he makes in response to Thorin's doubts made me want to cheer: "I know you doubt me, I know you always have, and you're right. I often think of Bag End. I miss my books, and my arm chair, and my garden. See, that's where I belong; that's home, and that's why I came cause you don't have one... a home. It was taken from you. But I will help you take it back. If I can."

What's the last movie you loved so much that you could've done a top ten for it?
Posted by Margo Berendsen at 5:00 AM