I might have cheated with that title. Because you'll see from my list that I had a specific kind of friend in mind...mostly of the four-legged kind. Are you an animal lover? I highly recommend these books.

Top Ten Tuesday is  an original feature/weekly meme created at The Broke and the Bookish blog with a different top ten list theme (all related to books) every Tuesday (see the full list here) This week's theme is "rewind" where we get to pick a past topic that we missed - favorite BFFs.

10. Pantalaimon, from the Golden Compass by Philip Pullman 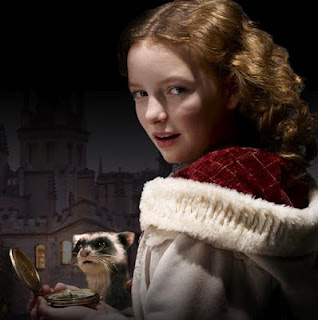 In this series, animals are the embodiment of a person's soul, and Pan caught my heart from the very beginning. He is able to change forms, so he appears sometimes as an ermine, a moth, a wildcat or a mouse.

9. Narknon, from the Blue Sword by Robin McKinley
I couldn't even find any fan-art for this noble hunting cat who befriends Harry Crewe after she's been kidnapped by a band of desert horsemen.

8. Mogget, from Sabriel by Garth Nix 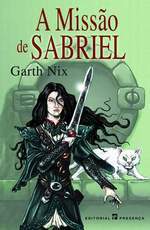 I used the Portuguese cover of this book because it was the only one with a picture of Mogget (though Sabriel's outfit doesn't do justice to her bells. The bells are VERY important, much more than the sword. Though the sword is cool, too. Sorry, I digress). Up until this weekend when I finished reading Sabriel, my favorite fictional cat would have been Grimalkin, the smug faery cat from the Iron King and its sequels. But then Mogget came along with all his attitude, plus the fact that he's not just a cat - he's something a little darker, too. But mostly a cat, fastidious and know-it-all and opinionated. And whatever you do, don't take his bell collar off! 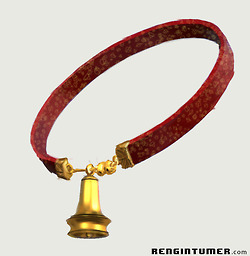 7.  Gilbert from the Familiars, by Adam Jay Epstein 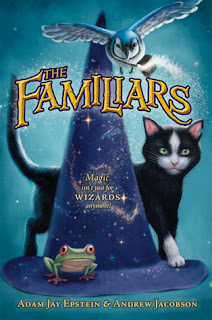 A tree frog who can see the future by looking into a puddle - except he sometimes gets his "puddle-viewings" wrong. Part of the wonderful trio of magical misfits in this story.

6. Talat from the Hero and the Crown by Robin McKinley 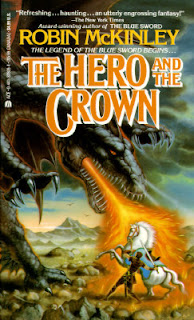 See that white horse that isn't afraid of a blast of dragon-fire? That's Talat. Aerin and Talat make this book just about the best girl/horse story I've ever read, and I've read A LOT of them (they don't come much horse-crazier than me). Talat doesn't use words but he has such personality!

5. Einstein, from Watchers by Dean Koontz 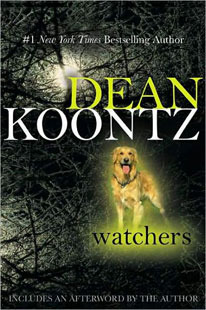 So hard to pick a favorite dog! There are so many classics, and I love them all. Lad: A Dog by Albert Payson Terhune was a close second, but the golden retriever with a special gift in Watchers is always the first to pop into my mind. 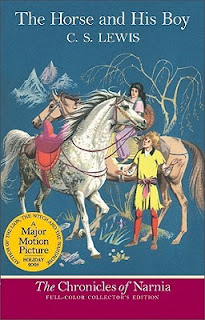 As the only Talking Horse among regular horses, Bree developed quite the attitude, not to mention vanity. But you can't help but love his bossy nature and his secret fear of lions.

3. The Phoenix, from David and the Phoenix by David Ormondroyd 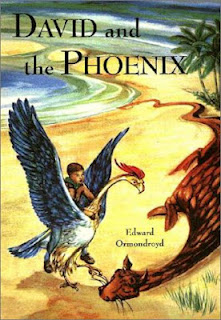 After living 500 years, this fussy bird knows a thing or two:  the difference between a gryffin, gryffon and a gryffen;  where sea monsters like to sleep and how to out-race a witch on a new broomstick.  I re-read this book every few years just because I love the Phoenix so much.

2. Ebon, from Pegasus by Robin McKinley 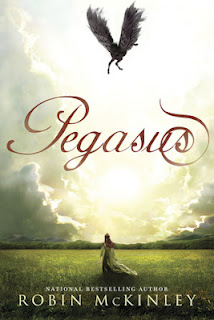 I think it's every girl's secret or undiscovered dream to bond with a creature - a dog, a horse, in a pinch anything furry might do; even a human, if that human doesn't turn out fickle. It's a deep longing for a best friend who just looks at you and understands you. No explanation necessary. No needing to be someone or something you're not; you are loved exactly as you are - more than just loved, but admired, sought out, inseperable; someone who stands at your side when dangers and bullies arise and you know they'll stand with you to the end. Of course this fantasy is all the better if it's a magical creature that introduces you to fantasic places or whisks you off on a magical adventure. And add wings to that? Someone who can take you flying? That's the heady deliciousness of this book.

1. Toothless, from How to Train Your Dragon 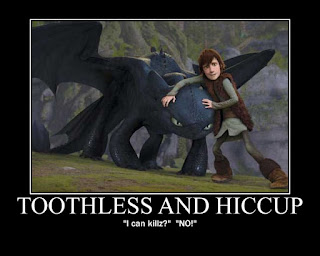 So in the book, Toothless is a female dragon, very small (much too small to ride on) and very much toothless. And very, VERY disobedient. I loved her, and was quite offended when they totally changed the character in the movie version. But when I saw the movie, I fell in love with the other version of Toothless too. My absolute favorite scene is when Toothless and Hiccup kidnap Astrid and terrify her with all kinds of crazy flying stunts.

Who is your favorite fictional friend, four-legged or otherwise?

Posted by Margo Berendsen at 12:44 AM